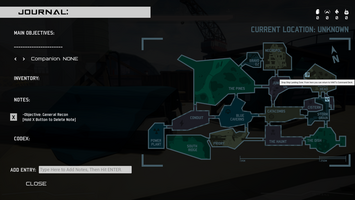 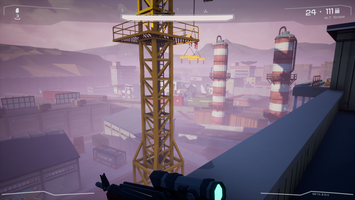 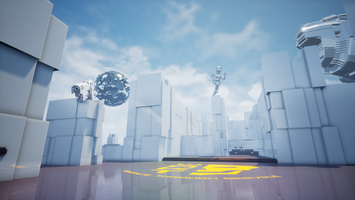 We have come a LONG way since Spring 2020 when I started work on ADACA!

The finish line is in sight for the 1.0 Steam release!

But first, a LOT of play testing needs to be done on what will hopefully be the final Beta build!

-The player now has 3 weapon slots! (One being reserved for sidearms)

-The player can now spend collected Artifacts at various vendors around the Zone for weapon unlocks, equipment and Lore Codexs.

-Any weapons or gear bought with artifacts can now be accessed in a new Armory room in the Vakt Ship and can be taken into Patrol or any Conscript Mission!

-Artifacts have been hidden in Conscript missions.

-New secondary tutorial level added to Zone Patrol for those who wish to play it before the Campaign.

-The player character will lower their weapon during dialogue where that action would be appropriate.

-The player can now lower their weapon by holding the Use key.

-Fixed glitches caused by 2 signal scanners existing at the same time on one map.

-Fixed the Crossbow. It's not horribly broken anymore!

-Trap Anomalies will no longer consume bullets that trigger them.

-Fixed a glitch that was causing a bunch of ragdolls to spawn at the center of a map after loading a save.

-The player will now leave the scoped in view when they die.

-Fixed glitches where the Naturalist modifier would cause some sound effects not to play.

-The unmarked soldiers will now cause the player’s ridicule to turn red when aiming at them.

-More artifacts have been hidden in the Zone.

-NPCs will now look for cover when panicking.

-Hyper Storms will now cause NPCs to panic.

-NPC companions will now teleport near the player if they get too far away.

-Advancing Dialogue text that is still scrolling will prompt it to complete instantly.

-The hatch to the Concrete Forest will stay opened after entering and leaving the area.

-Finalized the Companion system in patrol: Companions will now be unlocked through quest progress.

-Important locations like Quest Givers will now be marked on the Zone map after being discovered.

-Flares are now much brighter.

-The Flare Gun has been re-introduced into the loot table.

-AI will now do normal damage to other AI. The damage debuffs on weapons will now only apply to when AI are targeting the player.

-Some weapons have gotten buffs to damage and or ammo capacity.

-Wooden boards will now break in one hit when using Force Punt on them.

-Monsters and Anomalies are more likely to spawn at night in patrol.

-NPCs will now face each other when talking.

-Psy attacks will no longer do permanent damage to the player’s health.

-Redesigned an annoying dungeon encounter to make it less annoying.

-General polish made to Ep 2 levels.

-The Haunt is now even more spooky.

NOTE:
There is a known issue where playing the game on FullScreen Mode at a Resolution ABOVE your display’s max resolution WILL cause poor performance and graphical issues!

Please ensure you have selected a proper resolution for your display!

-Full menu controller support has been postponed until after launch.

-Keys 1, 2, and 3 now select the Sidearm, Wep A and Wep B slots respectively.

-Scrolling up is now the default control for switching to previous weapon.

-V is now the default key for switching Grenade type.

-A text tip describing the currently equipped weapon’s alt fire will now appear where the second weapon’s ammo would appear on the HUD.

-The Info Terminal has more information.

-A secret that never existed now does.

-He never left, he didn’t die, he’s just been hiding.

-Those stairs are not an entrance, they are only an exit.

-The chair is not empty.

-A friend has returned.

The road ahead is now mostly networking and last minute marketing for me!

If no problems arise in testing I'll be ready to announce the final release date soon!
(Spoiler: its not a long time from now...)

I’m really excited! You’ve come a long way, and 1.0 is on the horizon!