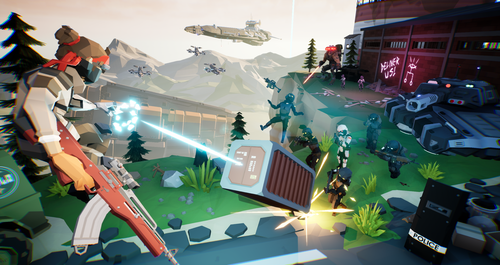 *(Well not really, there’s still going to be Ep 3 and Zone Patrol content updates in the future. But for now ADACA 1.0 is finished and released!)

-Changes have been made to Zone Patrol. They can not be detailed as doing so would be spoilers.

-Fixed bug that was causing NPCs to sometimes not react to seeing enemies.

-Fixed bug where being sent to Storm Drain via a rift could spawn you inside a train car.

-Actually fixed bug where some text in HUD would scroll off screen at high resolutions.

-Sentry turrets now save their faction after it changes.

-Fixed bug where the player could spawn with a loadout that they were not supposed to have.

-Fixed bug where the player’s body would fling itself wildly into the air after death.

-Fixed bug that cause AI with Plasma Rifles to fire them forever.

-Fixed bug where AI could get stuck in drop pods.

-Fixed glitch that caused player to spawn under the floor in Power Plant in Zone Patrol.

-Fixed bug where using the Ammo Bag equipment would not increase the max ammo you could scavenge from weapons on ground.

-Added solution to hopefully prevent player from falling through the ground when starting the level The Breach.

-Weapon Name and Weapon Alt Tip should no longer wander off of the screen when playing at high resolutions.

-Version tag is no longer visible in HUD

-Companions in Zone Patrol will now teleport behind the player rather than randomly near them.

-Picking up Sentry Turrets will make them stop shooting you.

-New Shield visual effect that should no longer blind the player…

-Improved signage in the Zone to help with navigation.

-Artifacts will no longer produce a signal.

-First cop in Ship Breaker will no longer turn around if they hear the player.

-Lowered Minotaur Max Health and made them more aggressive.

-Gave Minotaurs a crit spot on their back.

-Nerfed the amount of damage the Slag Cannon does to the player.

-Made it so explosive damage does more damage to energy shields.

-Hyper storms no longer bias towards hitting the player as often.

-Hyper storms will no longer occur in BeachHead.

-Aggroed enemies will now call out their target to near-by allies more effectively.

-Other misc improvements and fixes.

And thank you for playing ADACA!